I've not posted in a while, and I don't usually post about things related to gaming. However for anyone that's ever played Space Station 13 documentation is essential!

This post aims to be a guide for general bits and pieces related to the game: roles, server hosting, and general tips. Hopefully it'll help when coming back to the game after a long break.

I found myself primarily taking on the role of an engineer (surprise surprise), however there's an awful lot to know to being successful (and I've still got plenty to learn!).

Grab yourself the following items, they'll be essential:

The main engine is the primary source of power, and it's one of the first things to get running, but there are a few things you should do first.

Get a hardsuit, this protects you from space. This is where to get one.

Equip the mask, suit and mag boots. Remove your engineering hat and enable the hardsuit hat (show in red circle at the top). It took me ages to figure this out... 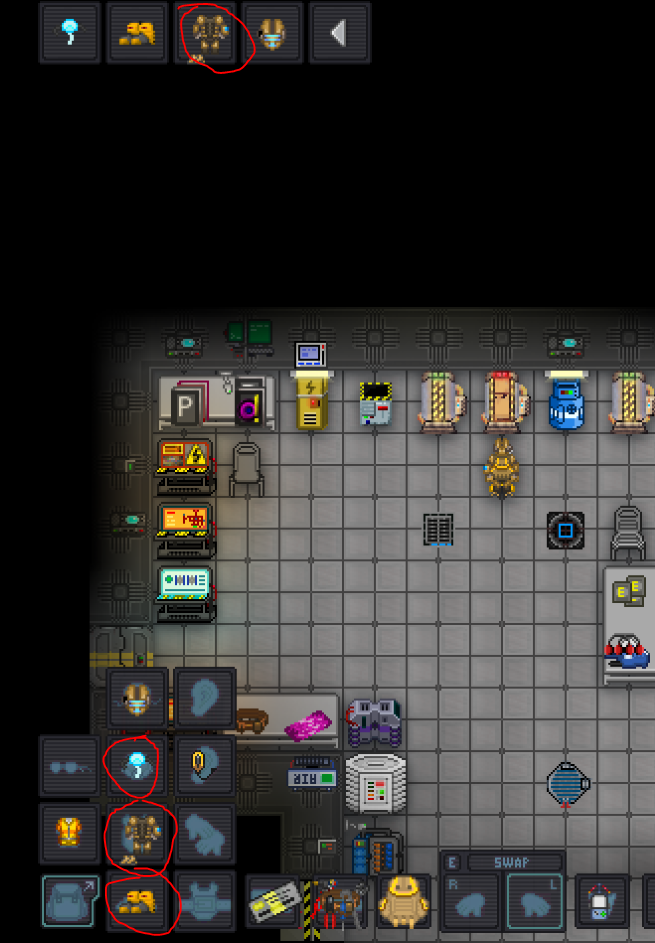 Finally, go into your backpack, grab the oxygen kit and put the cylinder into your hardsuit. You can enable / disable the oxygen supply with the top circled button. 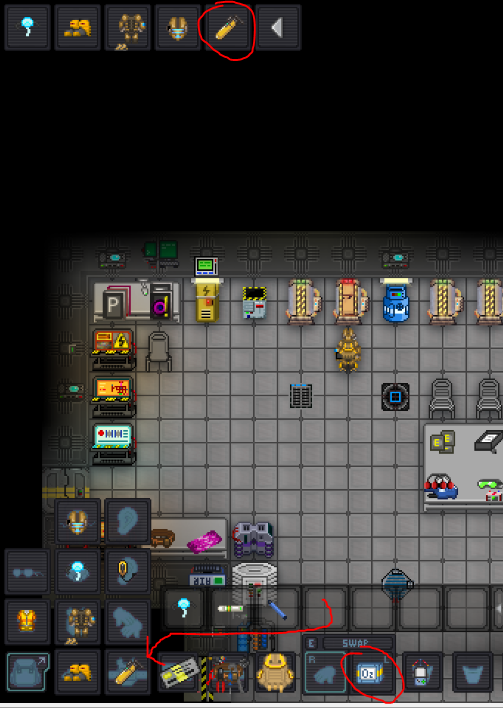 Now you're ready to start tinkering with the engines!

You have a choice of engines, but before you look into those it's best to change a few power settings first.

First go to the 3 SMES (Power storage unit) to the right of engineering. These provide power to the whole ship. Open each interface and set the charge mode to OFF. This prevents the SMES to the left of engineering from draining completely into the station before the engine is started. We'll have to return to these later after the engine is running. 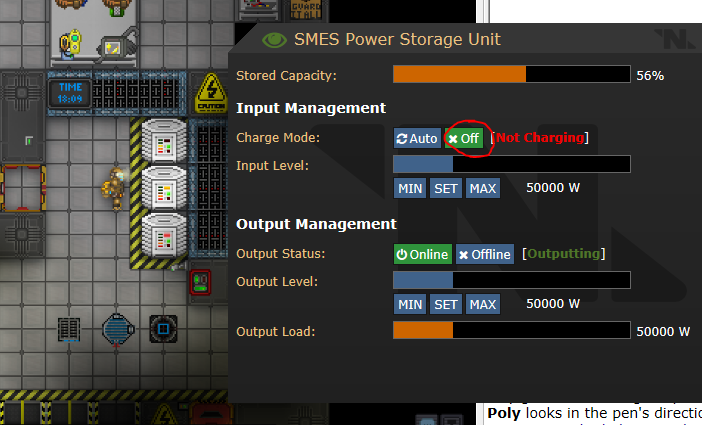 Now head on over to the SMES to the left of engineering, and set the output to 100000 and ensure output status is online. This might be a bit overkill, but I found it works well as long as you don't dither starting the engine too much. 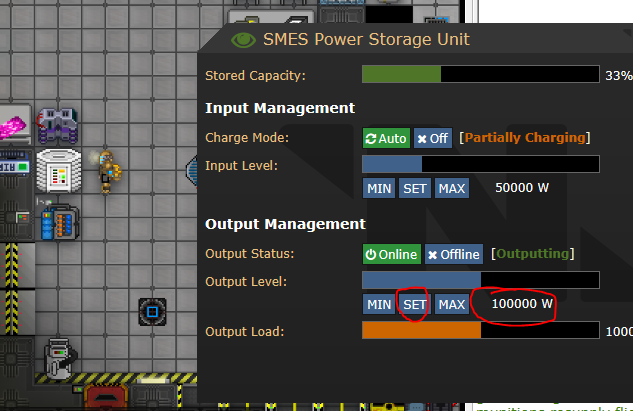 Now it's time to set up the particle accelerator (PA). This is what will actually fire up the engine. It's located to the south of engineering, and looks like an upside down T. 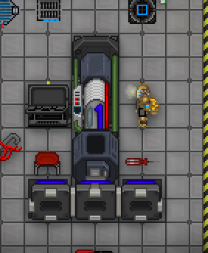 Grab yourself a wrench, and left click each tile of the PA (including the computer). Be careful not to bump into it before doing this or you'll push the pieces all around the room! You'll get a console message showing that you've secured the bolts, you should get this x7.

Now do the same thing, but with a cable coil. Click all 7 again with the cable to install the wiring.

Finally, do the same thing again but this time holding a screwdriver. You'll close the access panel on all 7 tiles.

Now go to the computer and click the 'Run Scan' button, you should end up with a status screen and a couple of controls. do NOT click Toggle Power yet! 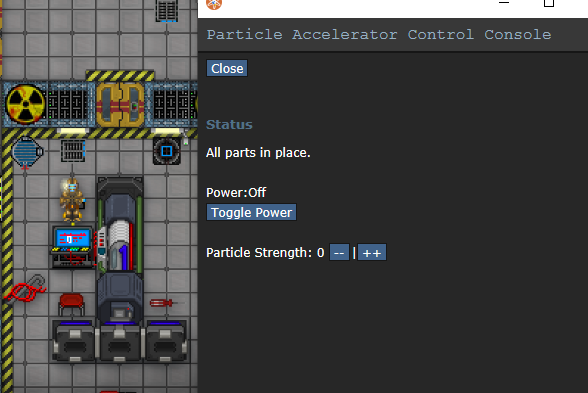 OPTIONAL:
By default the PA has a maximum particle strength of 2. You can push this to 3 with a simple hack.

Grab the screwdriver, click the PA computer to open the access panel, then grab your multimeter and click on it. You'll see a number of wires. Pulse all of these with the multimeter until you see 'Particle Accelerator Control Console makes a large whirring noise'. Now take your wire cutters and cut the wire. Then close the panel with your screwdriver. By doing this you should squeeze a bit more power out of the engine. 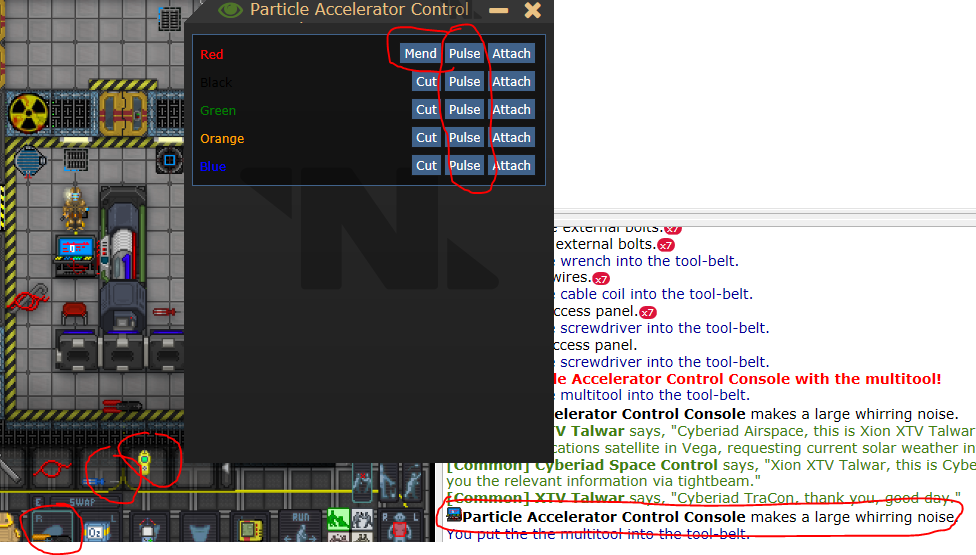 Now to start the main engine!

Two options exist, tesla vs singularity. It seems that tesla is the most popular, providing a significant power output while remaining (relatively) safe. The singularity on the other hand can get too large and start eating the station.

The Chief Engineer (CE) shouldmake a decision on which engine to use. However if you're just tinkering around by yourself there's a key piece of equipment you need.

IF ALONE (OR YOU ARE THE CE)
In older versions of paradise station, there are two 'engine cores'. One of which you move out of the way depending on tesla vs singularity. That's changed, and it took me ages to figure this out too.

Look for the 'Bluespace Engine Delivery Device' in the CE's office:

Common Setup (Applies to both Tesla and Singularity):
You will need:

First, go to the airlock at the bottom left or right of engineering. Click the small button next to the door to release it. 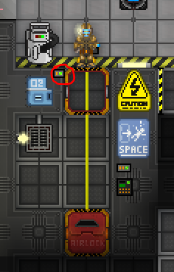 Turn on your oxygen and magboots, and click the black airlock panel. Then hit 'Force Interior Door' and then 'Force Exterior Door' (you could cycle the airlock properly but this takes ages, who cares for safety). 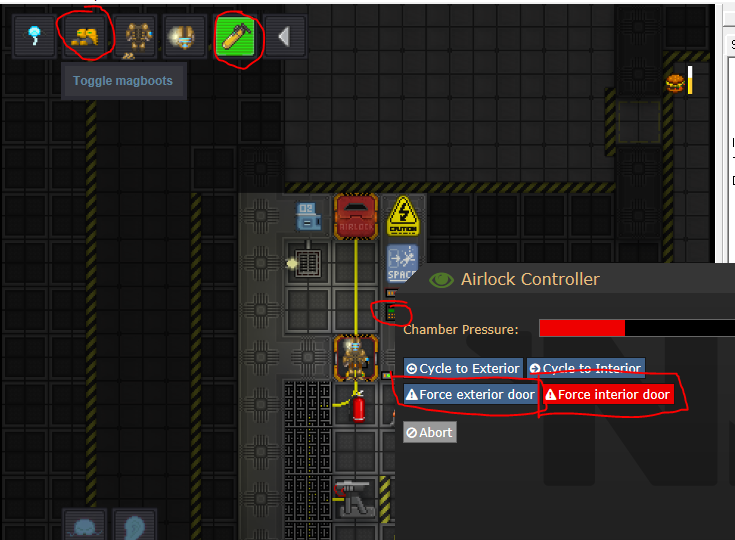 Go into the central grid, and wrench the Energy Ball generator, ior singularity generator into place. 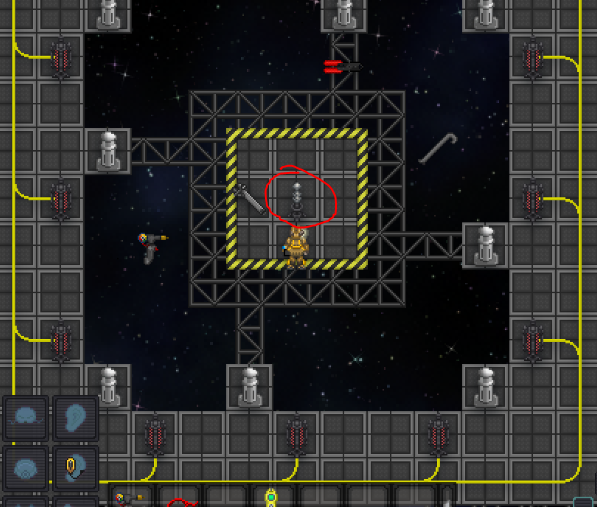 Now around the edge there are two pieces of equipment that are important. The Emitter andthe Field Generator. 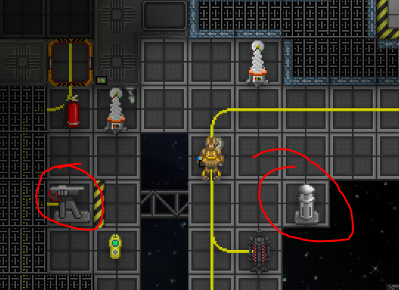 Go around each of the emitters, and click them with your hand to turn them on. Then take out your ID card and click them with the card to secure them. As you go to each emitter, (either clockwise or anti-clockwise) turn on the Field Generators in the middle too. Make sure you do not venture inside the ring of Field Generators or you may get stuck! Also take care not to get hit by the Emitters laser beam.

If all goes well, you should end up with a blue force field around the containment area: 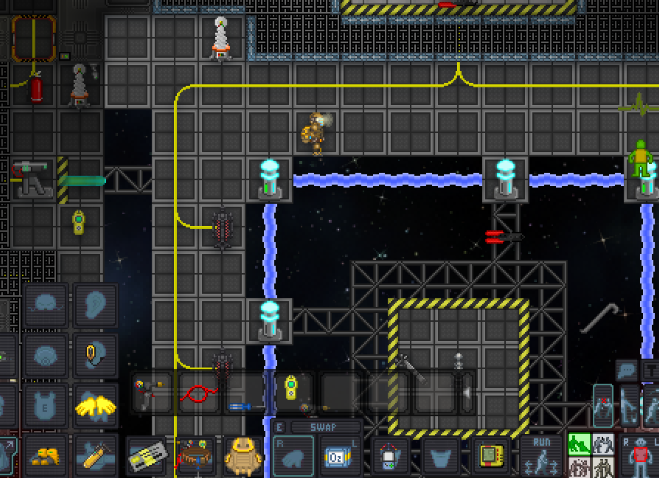 Now head over to the PA, and turn it up to the maximum (2) or (3) if you did the optional hack. Then turn it on. The engine should start and you'll see a tesla ball appear in the containment area after a couple of seconds. You can now leave the PA as it is. 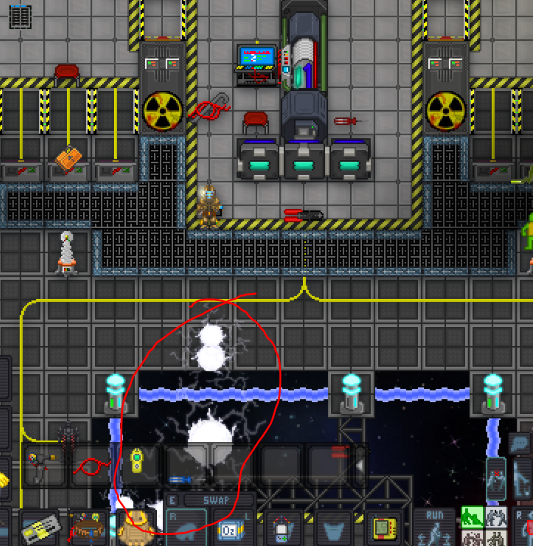 Singularity Engine
...coming when I can be bothered to write it.

Once the engine is running
Head back over to the left hand SMES. My preference here would be to use the following settings:

This ensures that the SMES will be fully charged if it's needed. There's nothing worse than trying to start the engines with no damned power.

Now head to the 3 SMES to the right hand side. I would use the following settings:

This feeds the maximum amount of juice into the SMES, and gives the station a decent quantity of power (450,000W), while keeping the SMES charging up just in case main power goes offline. 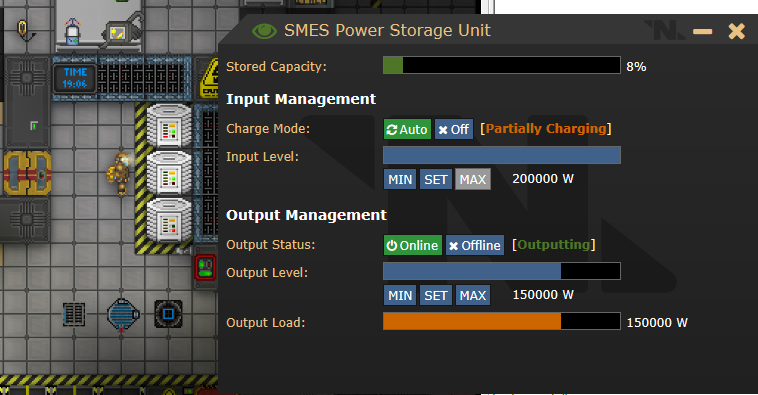 This is a pretty useful skill, and it's worth doing at the start of the round as soon as you've got the engine running. Find a door that's not used much, as you'll probably break it for at least a minute.

The basic idea is - you want to get through the door. There's two options:

First, grab a screwdriver and pop the access panel off. Then click on the door with your hand and get out the multimeter. 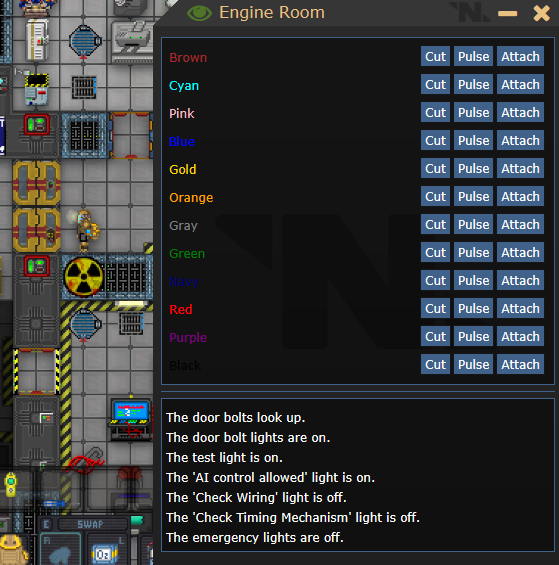 We're looking for two wires - main power, and the bolts.

Start pulsing each wire and note what happens.

Main Power - You'll know you've hit main power when all of the lights (shown in the white text) show as off, and the door isn't making any electrical sparking sounds. Make a note of the colour.

Bolts - You'll see in the white text that 'The door bolts have fallen!' Make a note of this colour, click it again to restore the bolts (providing the door has power).

There is more stuff you can use, but forget that for just opening the doors.

Back to the two options, and how to do them:

Using the standard SMES it's easy to power the station up to around 600,000W with the main engine and add another 800,000W to that if you've got full wack coming out of the solar SMES. 1.4MW might sound impressive, but you can do better - if you wire the main engine directly into the power grid!

Why would you want to do that? Well anything that gets a shock will get vaporised if they start tempering with things, so that's fun.

By using the map (link below) you can see that the station has a power grid in engineering which is fed directly from the engine itself. This grid feeds the 3 SMES arrays which then output power to the station grid.

The basic idea here is, connect the two grids together. The best spot for this as far as I can see is to the far left of enginering, near the maintenance door. 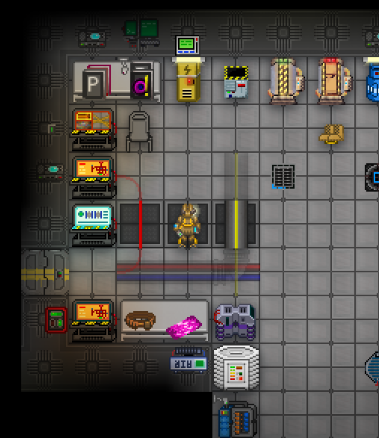 As you can see, the red wire to the left is the main power grid, and the yellow to the right is the engineering circuit. You can use a crowbar to remove the floor tiles.

Wire these together (see wiring), shown here in green wire, and check the power monitoring console.

We're dumping almost 10x more power than the station needs to the grid! I am using the tesla engine in this example, and as a result the output fluctuates significantly, by around 800kW.

If you try and cut a cable without any gloves now, you're instantly put into critical! 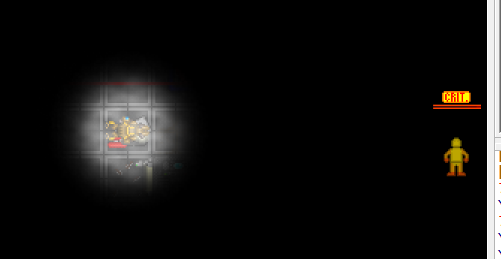 Problem:OpenPYXL is a python library for parsing excel files. It's fantastic and works really well. Plenty of features are supported but my primary use-case is to simply read data from various sheets and convert the contents into a dictionary / list of dictionaries. The